For my daughters 5th birthday the theme was Under the Sea.  I am only sharing the invitation and cakes from the party, but this was a fantastic pool party and a success with my daughter who is my biggest fan and littlest critic! 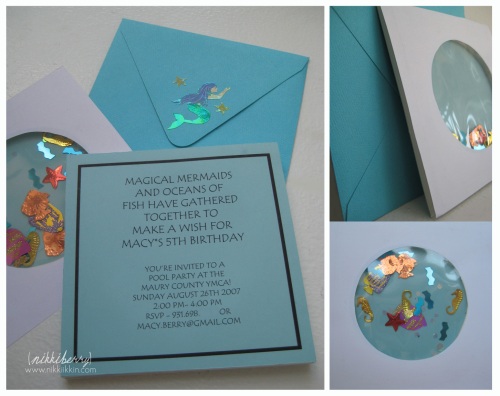 Under the Sea Invite Shaker

This party’s invtation is a very unique “shaker” card that we really sent through the mail.  As you can see from the profile shot above it is a thick card that required extra postage but arrived to our guests fine.  I believe I did write “hand cancel” on the envelopes to help them receive some TLC at the post office but who knows if that really helped!  These cards where on the complex side to create but they were worth it and were an impressive surprise for our guests to receive.  Heres how they came together:

The informational side of the card was designed and printed as a 5×5 square.  5″ squares were also cut out of the foam core, transparency film and unprinted scrapbook paper.  A center circle (a square would work too) was cut from the foam core and scrabookpaper.  And then it was like a sandwich, stacked up with the info face down glued to the foamcore, confetti sprinkled inside, transparency film to seal it and the scrapbook paper to cover and complete it.  Being our theme was Under the Sea, this was meant to look like a fish bowl but it could be reinterpreted for any theme.

Under the Sea Cupcakes

I have mentioned before that my spoiled little mice get more than one cake for their birthdays because there are usually separate days of celebrating.  Macy had two parties her 5th year with this theme, one at school and one with family and friends. On her actual birthday she enjoyed Under the Sea character cupcakes at school and a Mermaid Kelly Doll cake at home with us.  This was my first Barbie type cake.  Little Kelly was easy to turn into a mermaid by simply covering her legs with individual scales made out of fondant, all her Sea friends were fondant also.  These characters were on the simple side of creation, by todays standards it takes much more complex cupcake toppers to impress.  (You can see some of my current cupcake work in my Yo Gabba Gabba cupcake masterpieces here) 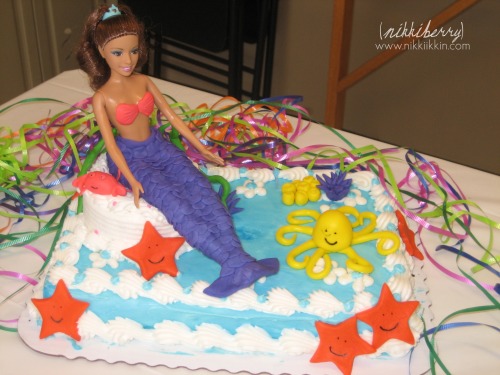 Under the Sea Mermaid Barbie cake

There is an interesting story behind the real Under the Sea party that year.  It was one of a few times that we decided to return back home to Tennessee to celebrate with family and friends.  Flight delays and ultimately a flight cancellation nearly kept us from getting to TN.  When we did get there it was just a few hours before the party and without our luggage full of party supplies.  To save this party I picked up two pre-made cakes from a big box store, I think they were the Carebear cloud designs but they worked as ocean too.  I grabbed a new Barbie and some fondant and within an hour the cake was complete!   I hope that my emergency cake experience for this party can one day help someone else out if they are in a pinch to produce a custom cake.  Dont panic, just add to a ready made and no one will be able to  tell that it is a impromptu design!