Doing gallery walls are like working a puzzle to me.  It’s very satisfying when the pieces fit together just right, with a balance of scale and an aesthetic relationship. I have a huge assortment of tear sheets and photographs of gallery walls.  Retail stores and hotels are great resources to find them.  I often look to them for ideas but mine never end up exactly like what I’ve seen.  Thats what makes them an inspiration, they just get my creative juices going!  With several moves in the last few years, I’ve had the opportunity to do several gallery walls.  Sometimes when I do one, it begins as a starting point that I know I will be adding to or swapping out pieces later.  Other times I put it together with no intentions to make any changes. 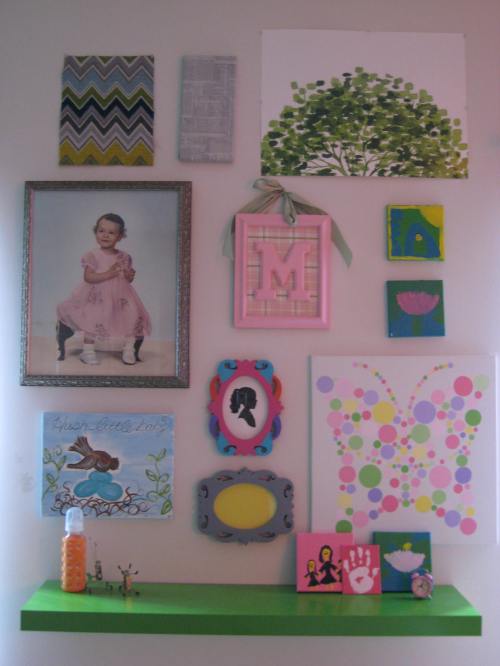 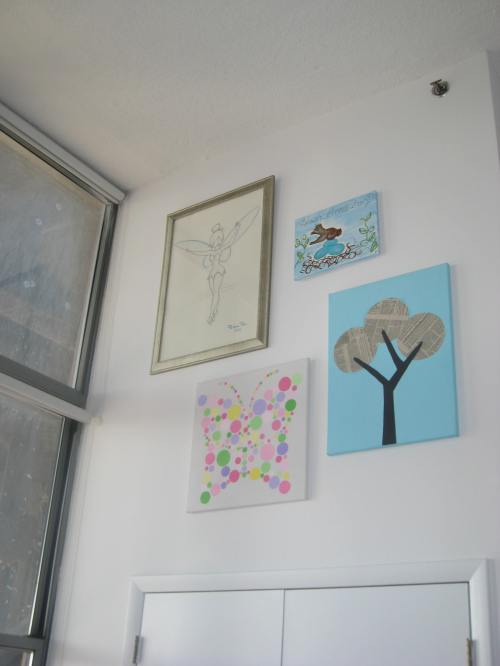 My first wall was Macy’s bedroom in Manhattan. We had 13 foot ceiling, so I had a huge space to work with.  Luckily I had enough floor space too because I laid all the frames out on the floor and moved them around until it was right before I attempted to put any on the wall.  This was the same technique I used for Macy and Hudson’s combined wall in NC and Brooklyn.  Our Brooklyn apartment also has 13 foot ceilings and the children’s room has two full walls of windows, so it was hard to find a good space for a gallery wall.  I ended up disbursing most of what we previously used to other areas and putting a small grouping over the closet doors.

In our Brooklyn living room I was unsure of what art or pictures I wanted to use on a huge 12 foot wide x 12 foot tall wall.  This ended up with me procrastinating for a few months until I broke down, photographed all the pieces and the wall, put them in Photoshop and worked and edited the space just as I would have (and have done) for an interior design client.  This was just the way to do it and it made complete sense to me. But it had my husband and friends rolling with laughter that I would go to this length and put so much effort into it.   My effort will pay off again because on this wall I already have two large portraits to add,  so it will be tweaked in few months and I plan on doing it using Photoshop again!  It is my intentions that this wall will always be changing and growing as we wish to start collecting local art.

For the next gallery wall in our Brooklyn bedroom, I told my husband that I didn’t want anything to do with it, that he should take a stab at it  as punishment for laughing at me!  And he did, but the way a man would.  He just started nailing and hanging it all up without a plan.  Of course he showed me up because it worked perfectly and it looks just a good as mine with a lot less fretting.

Comments Off on Gallery Walls